At the moment, we have to focus on the development of the Issmit-app. But after the development, how can we integrate it into an commoning-infrastructure? I only got some general thoughts and want to share them with you.

Integration into the Fediverse (activity-pub)

Who moderates instances of the Issmit-App, if we do not want to be in that position? There are people out there, who are into that - and as far as I see, they set up and moderate a cluster of apps, if they are in any way connected. For example, there is https://tchncs.de, https://graz.social and other, often local hosters (Mobilizon instances). If Issmit becomes part of such a cluster and if it seems useful to such a (local) social network, there is hope, the some hosters also setup and moderate Issmit-instances.

How can we integrate the issmit-app into the fediverse? The core-feature of the issmit-apps are cook-events and some of them are public. A public-event could be published on a local Mobilizon-instance (for example: https://events.graz.social ). This really shouldn’t be a problem and people, who do not know the issmit app, can join and/or become users of an Issmit-instance. If an event is on a mobilizon-instance, it can be shared all above the Fediverse, including mastodon.

This is one step into an social infrastructure.

We discussed a lot about a possible bridge to karrot, but of course, it has a lot of dependencies. In case, this partnership will happen, we can build bridges to offer Issmit-Users saved food from Karrot-Users to create meals and events out of it and Karrot-Users could be offered meals/cook events in return.

If there would be a bridge between karrot and issmit, we can think about a new app, which lets people self-assign to activities, which are offered by karrott and/or issmit app. Some kind of self-assignment-aggregator, which will need access to the user-accounts of the specific user, which he has on the issmit-app-instance as well as the karrott-app-instance. Such an aggregator-app could be a big step for a real commoning-infrastructure.

This is, how I can imagine a second step after the development of the Issmit-app is finished.

And of course I made an illustration. 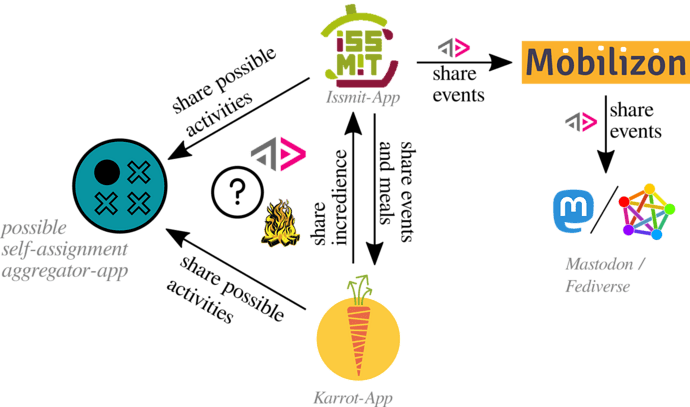